Football Tasmania is committed to ensuring the State can still benefit from the 2023 Women’s World Cup, despite FIFA’s decision not to select Launceston as a host city.

Football Tasmania CEO, Matt Bulkeley, said the decision by FIFA was a setback, but he welcomed the comments of the Premier this morning.

“This morning the Premier made it clear that he wants to continue discussions with Football Tasmania about the best way to ensure our sport has the infrastructure it needs,” Mr Bulkeley said.

“We will work constructively with anyone who wants to see the World Game continue to grow in Tasmania.

“We believe that the State can still benefit from the Women’s World Cup in 2023 by hosting national teams to either train in Tasmania or make the State their base-camp.

“It’s important we seize this opportunity given football is clearly the most popular team sport in Tasmania and we have the highest proportion of female football participation of anywhere in the country at 28 per cent.”

Mr Bulkeley thanked everyone involved in the bid process.

“I’d like to thank the State Government and Events Tasmania, as well as the City of Launceston for their hard work ensuring Launceston put its best foot forward.” 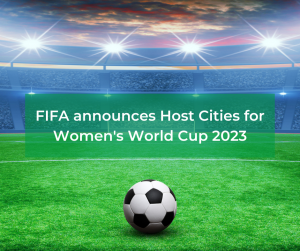